In my last post, I discussed the motivation for applying Network Theory towards analyzing the WikiTree genealogy database. In this post, I will discus the nitty-gritty details about how to define such a network. In fact, I have come up with 3 different ways for defining such a network each of which has its own advantages and disadvantages.

Perhaps this does not sound very interesting? “I was promised exciting discoveries not nitty-gritty network definitions!” you might say. Well, I promise, the discoveries are coming! Stick with me through this adventure because I’ve discovered that these details make a big difference on the analysis! 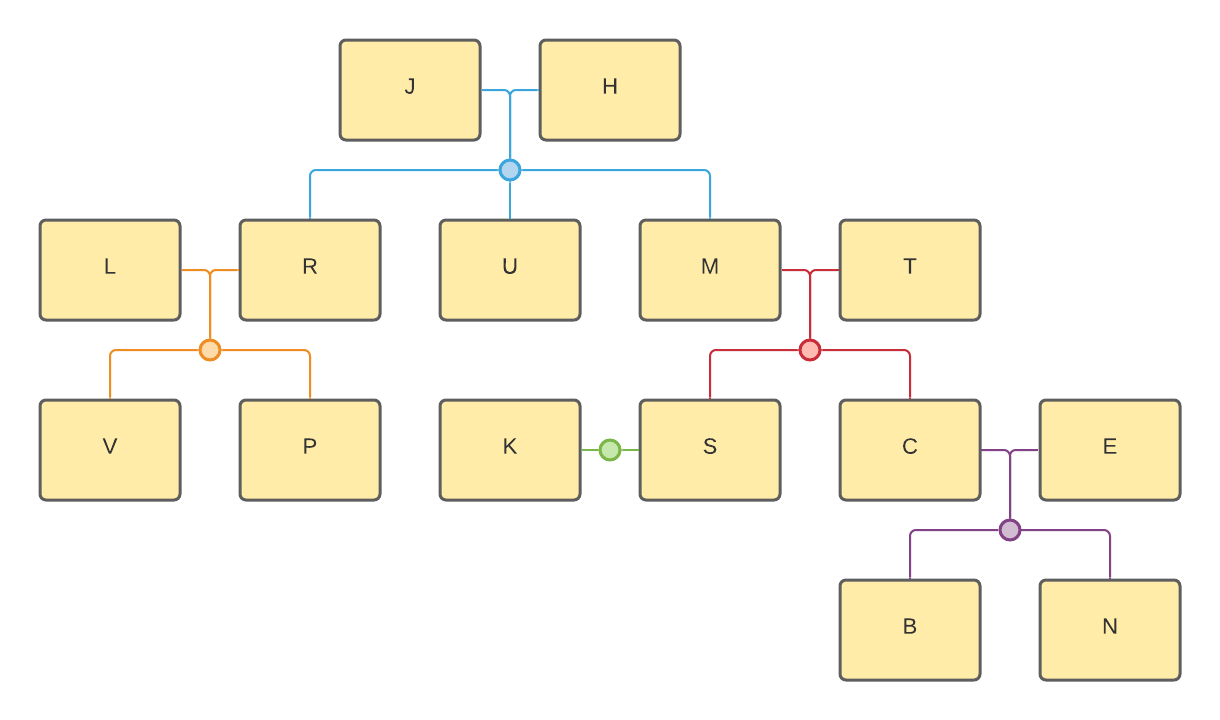 In order to visualize these different representations, let me use this simple family tree. It contains 15 people (3 generations of descendants from J & H and the spouses of those descendants). Keep this tree in mind when reading about the various network layouts I propose below. Note that I consistently use the same colors to denote each family unit and the same letters to denote individual people. 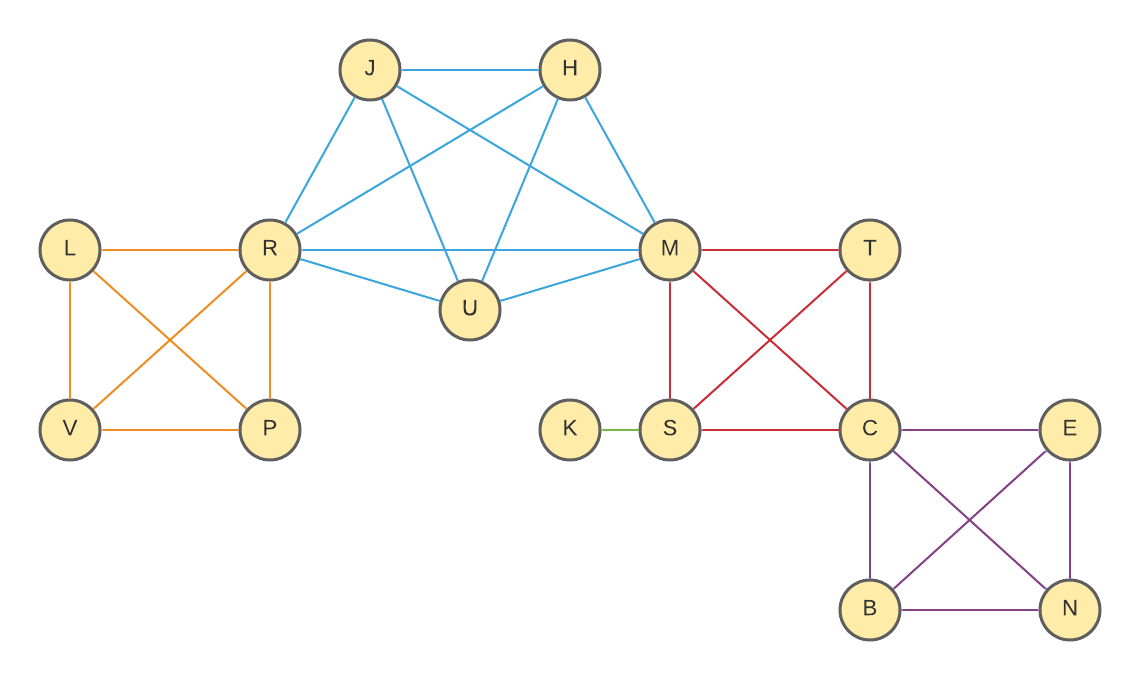 This is the most natural way to represent the WikiTree database as a network. Each node represents a person and two nodes are connected if they represent a parent-child, sibling or spouse relationship. 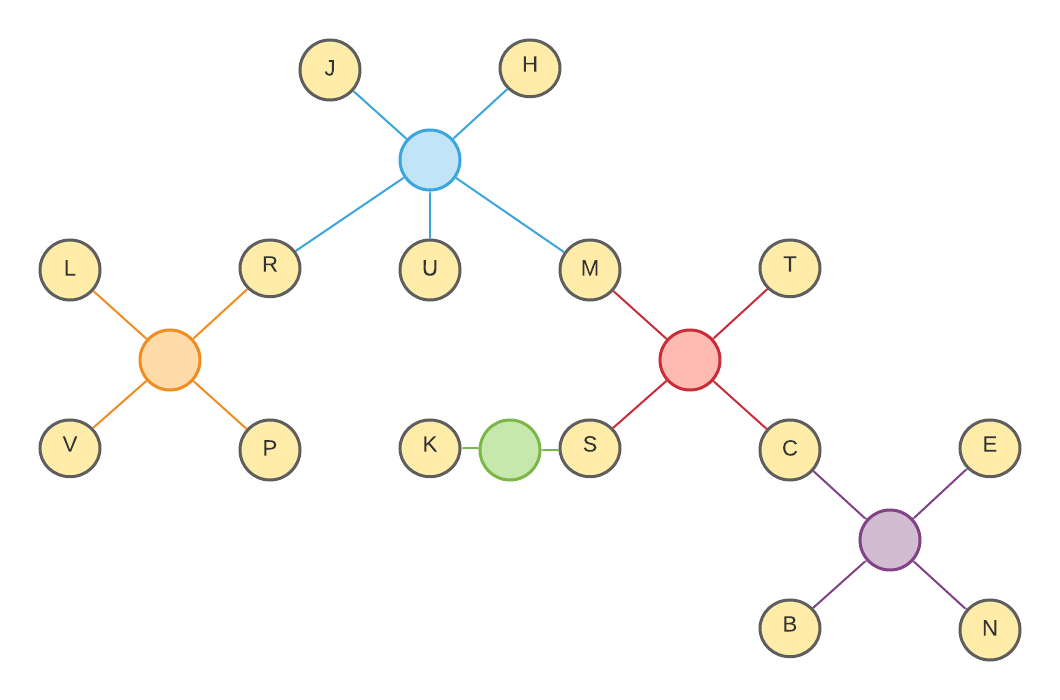 In order to avoid all the cliques present in the Person Network, I thought maybe I would aim to make networks that look more like standard family tree visualizations. In the Example Family Tree above, we don’t draw edges between every person in a family to every other, instead we connect them all through a common central splitting line. To mimic that, we could add a new node type to represent every “nuclear family unit”. So now we have two types of nodes: Person nodes and Family nodes. In this network I will never connect any Person node directly to another Person node (and never Family to Family either). Instead I will connect every Person to all of the Families they are a part of (the one they were born into and one for every marriage/co-parentage they have). Mathematicians call this sort of network a Bipartite network. 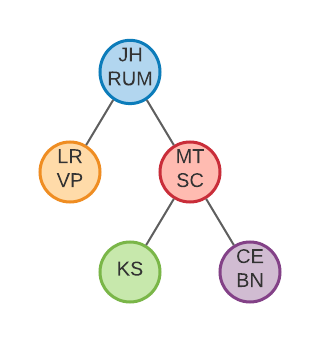 The Person nodes don’t seem to be adding much information in the Bipartite Network image above. They mostly just seem to either connect to two Family nodes (if we know their parents and they were married or had children) or to a single Family node (if they never wed/had children or we don’t know their parents). It seems like the Family nodes are really representing most of the interesting connectivity in this tree. So, what if we built a network with only Family nodes? Since we no longer have Person nodes, I have labeled each Family node with the people it represents (2 parents/spouses at top, children at bottom). Now, how do we draw edges on this network? For every person, we connect their childhood Family node to their adult Family node (if they ever marry/have children).

Thanks for sticking with me through the details! In the next post, I’ll share the first exciting discovery I’ve made which wouldn’t have been possible without having these networks in mind.