As promised, I will now present my first discovery based on analysis of the various WikiTree Networks which I described and clarified in previous posts!

Where do we even start when trying to analyze these mega-networks? As Bernard has repeated many times, there is no easy way to visualize these giant networks directly and many network algorithms do not scale well up to networks with millions of nodes. One common place that many researchers seem to start is analyzing the “degree distribution” of the network. 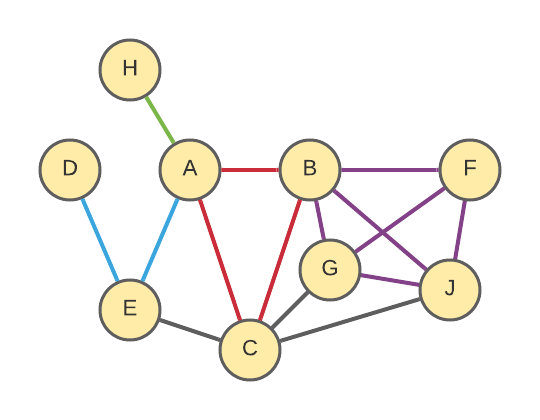 In the Person Network, the degree is the number of people linked from that person’s profile (in other words, the total number of parents, siblings, spouses and children). In the language of the 100 Circles project, it is the size of the first circle (C1).

Degree distributions are most often represented as a plot.

So, what do the degree distributions look like for our networks?

[Notice that for the Bipartite Network, I plotted the two different node types (Person & Family) separately because (as you can see) they have noticeably different distributions.]

OK, so what are we seeing here? Well they all have similar shapes. Tons of nodes with small degree (few neighbors) and then a drastic drop-off. As far as I can tell, this general description fits most networks. It’s extremely common for networks to have most nodes with small degree and quickly drop-off with only a few nodes having giant degree. But there are subtle differences in the shapes that these distributions can take that only become apparent once we use a different plotting scale. Let’s dig into each one separately:

Alright, here we have the exact same data plotted in three different types of plots.

Why have a chosen these specific plots? Well it turns out that “Power-law Degree Distributions” are extremely common and well studied in Network Theory. The “Exponential Degree Distribution” is definitely not as famous, but it also seem to come up again and again in the literature.

Here are the same plots for the Bipartite Network. I’ve completely separated it so that we look at only the Person Nodes first and then only the Family Nodes since their distributions are much different.

Neither of these regression lines look great to me, but it does sort of look like the Power Regression might apply if we ignored the left-most and right-most points.

For the Family Network, the degree is the number of “family units” connected to this one. Specifically, the number of childhood families of the parents (2 if they’re documented on WikiTree) + the number of families the children start.

Wow, wow wow wow. Look how well that Exponential Regression fits the Degree Distribution! Certainly it is not perfect (the blue line wobbles a bit), but compared to all the other regression lines we’ve seen, this one fits like a glove! So this is my first discovery: The WikiTree Family Network has Exponential Degree Distribution. In fact, this is what convinced me that the Family Network was worth considering further.

So … what does that mean? Honestly, I’m not sure yet. Ever since I discovered this fact about a month ago, I have been frantically trying to read everything I can about Exponential Degree Distributions. The fit is so good, that I feel like it must say something about our network.

The best I’ve been able to find so far is section 2.1 and 5.1 of the book “Evolution of Networks” by Dorogovtsev and Mendes in which they discuss how exponential networks can be grown via a process I will call “Random Attachment” in which we grow a network by repeatedly adding nodes and then connecting them to a random pre-existing node (without any preference).

This contrasts with the much more famous process of “Preferential Attachment” in which the added nodes are “preferentially” attach to nodes that have higher degree (the rich get richer). Preferential attachment appears to be an extremely popular theory in the Network Theory literature and it leads to a Power-law Degree Distribution.

Preferential attachment makes a lot of sense in other well studied networks: citations of published research papers; webpages and their hyperlinks; the network of actors who have worked together on films. In all of these cases, a popular node (often cited paper; highly linked to webpage; popular actor) is more likely to be linked to from a new node (new paper; new webpage; new movie). All of these networks have been shown to be power-law networks (also called “Scale-free networks”).

However, in contrast, WikiTree is a bit different. Certainly there seems to be some level of preferential treatment (a person with a large family already on WikiTree is probably more likely get further research as more relatives discover their profile and add details). However, when it comes to the degree of that node (the number of family members) this cannot grow forever! At some point there will be no more family to add because they will all already be on WikiTree.

So could it be that the WikiTree Person Network is being created by some sort of “Random Attachment” process? I don’t know. Continue on this adventure with me and perhaps we will discover the answer.